Newcastle Falcons welcomed three of the strongest men in the World today at Kingston Park, to launch the first Ultimate Strongman World Championship arena event being held at the Metro Radio Arena on 10th December.

Eddie Hall, 6 time UK’s Strongest Man and the only man to deadlift 500kg, Zydrunas Savickas, 4 time World’s Strongest Man and considered by many as the greatest strongmen of all time and Laurence Shahlaei, current European Champion from England faced off in a tug-o-war against Falcons players including Jon Welsh and Juan Pablo Socino.

Jon Welsh, Scotland International said, “Even for professional rugby players like the Falcons, the stuff Eddie, Big Z and Laurence can do is incredible. To have the chance to see a demonstration of their strength up close and personal is mind blowing. Definitely going to be at the live event to see the lads go at it for real on 10th December”

Eddie Hall said, “My family has always had close ties with the Newcastle Falcons and it has been wonderful to meet the lads at their home ground. Having seen their determination and commitment I’m sure that they will do the business against Exeter at the Big Night Oot”

On 10th December, Eddie, Laurence and ‘Big Z’ will lead out twelve of the biggest stars in strongman into the Metro Radio Arena to compete for this inaugural World Championship.

Disciplines will include the legendary Atlas Stones, Monster Tyre Flip and fans favourite the Deadlift Challenge, where the much awaited showdown between world-record holder Eddie Hall and Zydrunas Savickas is sure to bring the house down. 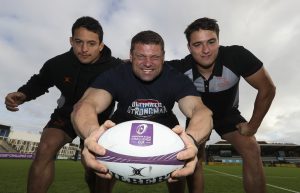