Taking place over 3 days, the first knockout round was held at Belfast’s stunning City Hall on August 25th, with the 16 athletes split into 2 groups competing over 4 events.

Hall, nursing badly damaged fingers from The World’s Strongest Man in Botswana a week earlier, got off to a shocker in the first event, the duck walk, where he placed last in his group. Scotland’s was Tom Stoltman took the win. In Group B a resurgent Jonathan Kelly of Ireland did enough to take first place.

Any thoughts that the other competitors had about Eddie Hall being down and out were quickly dispelled in the second event, the 150kg incline log, as Hall pumped out 19 reps to set a new UK record. In Group B there were good performances for Pa O’Dwyer and Jonathan Kelly of Ireland once again, who managed 9 reps for another maximum 8 points.

The third event of the day was the Pole Push – an event where technique as well as purse strength really come into play. There were a number of close heats such as Sean Logan v Ivan Gannon that set the context of the event.  However it was a clean sweep for Ireland as Sean O’Hagan and Pa O’Dwyer took top spot in each group.

The final event of Day 1, the 100Kg Sack Load into the Iveco vans, saw a number of athletes fighting for survival – the bottom two in each group would be eliminated. It was an all-Wales battle in Group A with Nathan Llewellyn and Ben Brunning trying to secure their through to the Semi Finals. Despite their best efforts both men were eliminated. In Group B Ryan Oldfield and Richard Bessant didn’t have enough left to beat the rest of the field, whilst Scotland’s Paul Benton had to dig deep to earn his place in the next round, turning around a terrible day in the office to come second in the truck load and bag a valuable 7 points.

Day 2 was at the historic Titanic building with Groups A and B reduced to 6 men. The first event was the truck winch. The athletes had to turn a giant winch to pull a 12 tonne lorry up the 20m course. The athlete’s forearms and backs were burning with exhaustion but Sean O’Hagan did it the fastest, pipping Eddie Hall to the win in Group A, whilst in Group B, Paul Benton proved his lacklustre performance the day before was just a blip.

The second event was Thor’s Hammer, with the 12 Semi Finalists having to throw the 56 pound hammer up and over the bar. Ivan Gannon of Ireland only managed the opening height but it was Eddie Hall who showed his power throwing a colossal 16ft. In Group B, Paul Benton continued his form by winning his second event of the day.

The third event was a new event created by Ultimate Strongman – Car rocket squats. Weighing in excess of 250Kg, Ed Hall dominated with his static power, squeezing out 12 reps. In group B Jonathan Kelly managed 9 reps to secure his place as one of the leaders in the group.

In the final event of the day a number of athletes faced elimination at the bottom of the group.  It all came down to the Husefell Stone carry.  In Group A Ivan Gannon used all of his determination to try and qualify for the Final, but it was Aaron Page who done enough to secure his place in the final.  In group B Ben Thomson walked a new UK record of 74.37 m.  Paul Smith, Pa O’Dwyer, Ivan Gannon and Sean Logan were eliminated.

The 5 event Final was held in the grounds of the Crumlin Road Gaol, and all the athletes were trying to knock the beast off his throne. Hall had openly been pain with his fingers, and many felt an upset was on the cards.  The tension was high and the first event was the tyre flip weighing in excess of 400KG.  This was a dramatic event with Phil Roberts of England having to withdraw from the competition with injury.  However, it was Aaron Page who slayed the beast with a lightning time of 30.51 seconds.  Ed Hall came second with 30.75.

If ever there was an event where Eddie Hall would not be beaten, it was Event 2 – the Deadlift for Maximum.  A number of athletes lifted 340 KG but it was the Deadlift King who wiped the field away with a massive 400KG RAW lift.  Can anybody on the planet beat The Beast in the deadlift?

The Alex Morton Axle Medley was next – a body shattering challenge where 4 axles weighing 127Kg, 147Kg, 167Kg and 187Kg needed to be pressed overhead. The bronze (127Kg) and silver (147kg) axle proved difficult but Ed Hall lifted the first two axles in just 13.73 seconds to secure his second victory of the day.

An unusual event was served up next, and it wasn’t one for those scared of heights. The Hirestore Deadlift hold saw the strongmen hoisted 20 feet up on a platform were they had to hold a pallet of whisky barrels weighing 400Kg  .This was a test of pain endurance and Jonathan Kelly Kelly set the marker of 43.92 but Ed Hall the defending champion wouldn’t let go to complete exhaustion and managed a time of 49.42 – nearly passing out in the process.

The final event was the classic stones of strength.  Ed Hall was so far in front, he could not have been caught so he elected to lift just the first stone.  However, below him it was a fight for the podium with Jonathan Kelly securing second with 4 stones in 23.96.  Aaron Page claimed third and Paul Benton with fourth.  Ben Thomson saved his best event to last finishing 4 stones in the fastest time.

So, Eddie Hall remains the dominant force on the UK scene, and his third place at World’s Strongest Man shows just how far The Beast has come since he stormed his way into strongman back in 2010.

UK’s Strgest Man will be aired on Channel 5 at Christmas.

8 competitors in Group A

8 competitors in Group B 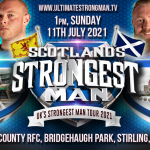 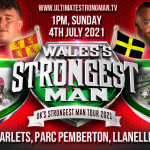