A few weeks ago, Ollie Clark took the nation by storm by becoming the new U23 UK Champion defeating last years champion Rob Spence.  Ollie therefore gains a place to this years UK’s Strongest Man from 23rd -25th May 2020 in Milton Keynes.  After his win we caught up with Ollie to reflect on this major victory and his thoughts on UK’s Strongest Man 2020.

Q1. How is it being U23 UK Strongest Man? Has it changed anything being the U23 UK Champ , is anything different for you?

A-  Winning u23 Uk strongest man has been the man goal and focus of mine for the last 3 years. It’s my 3rd time competing at that competition. I came 10th the first year, 4th the second year and won this year. It has been amazing to now finally win and has opened a lot of doors including the qualification to this competition (UK’s strongest man).

Q2. What have you did in your diet to prepare for this year’s contests?

A- I eat the same foods every day, my diet mainly consists of pasta, rice, bread, eggs, red meat, chicken and milk, with some junk also thrown in there. To prepare for this years under 23’s contest I had to make sure I was quicker and fitter than the other athletes, as well as being statically strong, therefore I dropped around 15kg of bodyweight and found this helped a lot, sometimes being too heavy can be a disadvantage in strongman.

Q3. What do you think of the line up for UKSM? Who are your challengers?

A- There are some big names in this years UK strongest man line up. I feel the main challengers will be Terry Holland’s and the current champ Paul Benton. My training partner Ryan Bennet is also competing and is one to watch out for.

Q4. How are you expecting to perform in UKSM?

A- This year at UK strongest man, for me is mainly the experience and to do as well as I can, however my goal is to make the final.

Q5. What are your ambitions as a Strongman?

A- My long term goal is to compete at the World’s strongest man and Arnold classic strongman competitions, and until then I aim to climb the British strongman scene, and to win UK’s in the future. 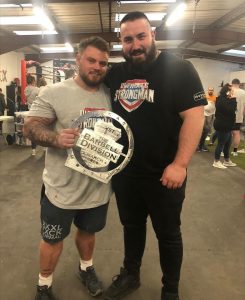