On Sunday 15th August in Bangor Co.Down was the grand final of Ireland’s Strongest Man 2021.  16 of the strongest men from all 4 corners of Ireland were gathered who earned their place from a qualifier prior to the contest.  Unfortunately, the defending champion Matthew McCoy was unable to attend due to an illness.  However, this was still an incredible line up of athletes who were hungry for the crown.  The first event was the Anvil carry where athletes had to grip an anvil horn and walk 40 metres.  This was a gutsy event which saw Blaine Donovan smash the field with a time of 16.34 secs on his Ireland’s Strongest Man debut.  The second event was the Tyre Viking Press weighing 140KG on the handles this saw a head to head showdown with Peter Bremmer with 11 reps and Pa O’Dwyer getting his first win of the day.  The only 2 men to make double figures.  The third event was the Brick Deadlift which started at 300KG and the early favourite was the deadlift specialist Peter Bremmer but he lack confidence and balance in this discipline.  This left Pa O’Dwyer to lift 360KG successfully to take the win.  The fourth event was the car roll which is an Ultimate Strongman signature event, again this saw Pa O’Dwyer show the experience he had over other athletes in this discipline by getting 19.81 secs.  It came down to the final event the stones of strength with stones weighing 100KG- 160KG.  Out of the 16 man line up only 5 men finished all the stones including Nicky Whelan, David Jones, Jack Harkin, Cillein Groom and the fast man on the stones was Pa O’Dywer with 24.28.  This secured Pa’s 5th and historic Ireland’s Strongest Man title.  Well done to Cillein Groom on placing runner up and David Jones securing 3rd.  These 3 men go onto UK’s Strongest Man from 3rd-5th June 2022.

Ultimate Strongman would like to thank all its sponsors, spectators and Ards and North Down for their help to make this event possible.

Full results are below: 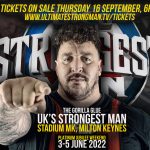 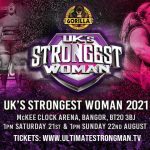 Have you got your UK’s Strongest Woman ticket? 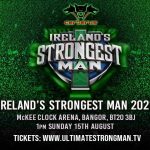