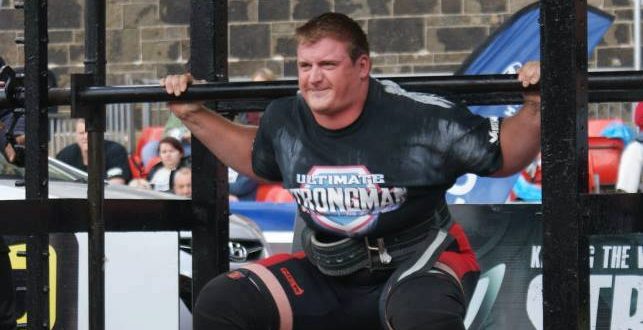 Mark Jeanes is coming back to the Ultimate Strongman scene with a bang by captaining Team Wales in the Battle of Britain 2.  In 2018 it was the hardest year for Mark in the strongman world with his personal life and coming back from injury upon injury but he is ready to dominate in 2019. For Battle of Britain 2 he is excited and ready for war.  He has been on behind the screen to long and now its time to show the other countries wales is a force to be reckoned with.  As a team he believes everyone has there strengths and weakness but a true team works as one and helps one another. As captain he will be a leader to show all have a part in this team and will give everything to achieve the goal.

Mark prepares for a competition by finding out as much information as possible events etc training.  For a competition he trains the 5-6 events regularly and focuses on consistency with training and food.  He believes this is crucial and keeping a fuelled tank will keep him ready for every session.  For Battle of Britain 2 he doesn’t see anyone as a threat but he focuses on his abilities and believes if he excels in a competition then he cannot ask anymore of himself and his team.  Mark’s biggest inspiration is all of the guys he competes with and he says that anyone can change and become strong to see someone achieve and gain strength is inspirational to him.

Come give Wales the support to win Battle of Britain 2.  Ticket link:  https://www.eventbrite.co.uk/e/uks-strongest-man-tour-the-battle-of-britain-tickets-53536094901